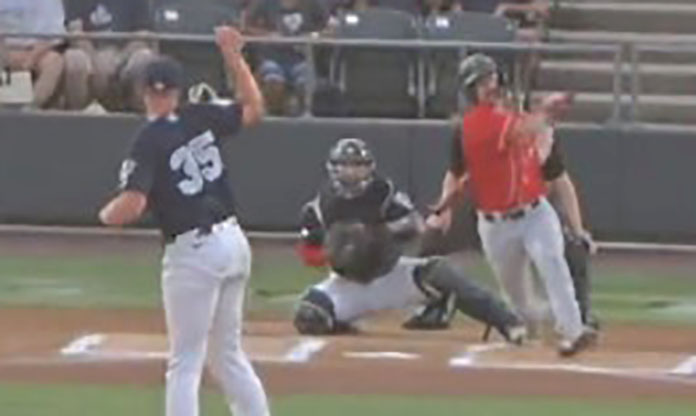 Yankees prospect Matt Sauer wasn’t perfect, but he did set a franchise record.

The 23-year-old Sauer, who was the Yankees’ second-round pick in 2017 (54th overall), struck out 17 batters in the Double-A Somerset Patriots’ 4-3, 10-inning loss to the New Hampshire Fisher Cats on Thursday night at TD Bank Ballpark.

The 17 strikeouts for Sauer, who began the game with five perfect innings, were the most by any Patriots pitcher in franchise history, including in the team’s Atlantic League era. The punch-out mark also was the most for any full-season starting pitcher in the minors — and majors — this season, according to the team’s website.

The game began with five perfect innings for Sauer, who allowed just one run in eight innings and left with a 2-1 lead.

Center fielder Everson Pereira, the fifth-ranked prospect in the Yankees’ organization, gave Sauer and the Patriots the lead on a two-run home run with two outs in the third inning. Pereira ended the day with his seventh multi-hit game at the Double-A level.

Sauer’s bid for a perfect game ended on the first pitch of the sixth inning, when Sebastian Espino hit a solo home run to cut into Somerset’s two-run lead.

Sauer’s chance for his sixth win went up in flames when Carson Coleman was tagged with his second blown save of the season, allowing a run in the top of the ninth inning.

The inning ended on a home run-robbing catch in center field by the 21-year-old Pereira that preserved the 2-2 tie and sent the game to extra innings.

Espino struck again for the Fisher Cats with a one-out, two-run single that gave New Hampshire the game’s decisive runs. Steven Jennings (3-3) was tagged for the loss, while Jimmy Burnette (4-3) earned the win.

Leo to Virgo: Women of these zodiac signs tend to disrespect their spouse and belittle them

Where Kelly Ripa, Mark Consuelos have had sex