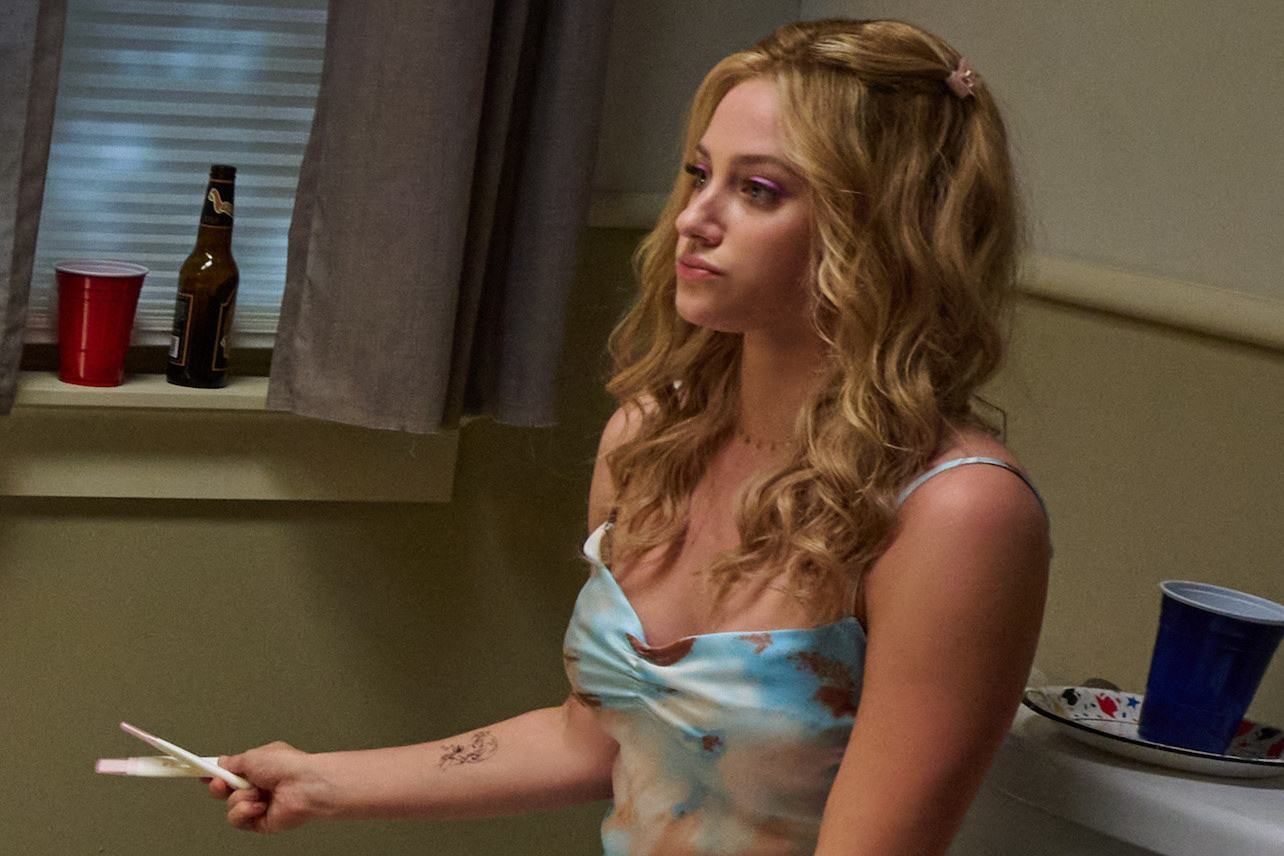 Riverdale star Lili Reinhart gets a true-blue full-blown official vehicle (and producer credit!) in Look Both Ways, a Netflix rom-dram-com directed by Kenyan filmmaker Wanuri Kahiu (Rafiki). And it’s not just a rom-dram-com – it’s a gimmicky rom-dram-com in which Reinhart plays two versions of herself diverging into parallel universes from a single point in time. Therefore, one may easily conclude that 2022 is the Year the Multiverse Broke, because the concept was adapted to banal genres. Still, Reinhart is undeniably an emerging talent, and she might be able to carry it – or should we just bury it?

‘LOOK BOTH WAYS’: STREAM IT OR SKIP IT?

The Gist: Natalie (Reinhart) and Gabe (Danny Ramirez, one of the non-Cruise guys in Top Gun: Maverick) are Just Friends. Just Very Close Psychologically Intimate Friends, to be precise. They’re on the verge of graduating from the University of Texas at Austin; they have a buzz on; they look each other in the eyes; and, well. You know what two very attractive people in movies do: They celebrate in a very sexy way. Now it’s the night after graduation, and Natalie can’t enjoy the moment. She’s locked in the bathroom with bestie Cara (Aisha Dee) and a pregnancy test. Whoops. They used a condom, but maybe it failed. She pees. Cara sets a timer. Everyone holds their breath.

There are two ways this could go. The first is, the test comes up positive. The five-year plan she discussed with Gabe in the opening scene? Which included moving to L.A. with Cara and pursuing a career in animation? Prolly not gonna happen now. Unless she decides not to keep the child. But she doesn’t go that route. That choice and divergent path is a different movie, just like the one that splits off from when she and Gabe decide to not make whoopie. Anyway, Gabe, who’s a drummer in a band that plays a cover of “We Are Young” by fun. and has a tour sponsor in spite of that, does the sweetest, rightest thing and supports her every step of the way, giving up his life on the road. She moves back home with her parents (Luke Wilson and Andrea Savage), who act like insane movie characters for a while, but don’t worry, they eventually settle down and resemble actual human beings. She and Gabe remain platonic through the pregnancy and birth and the no-sleep and the exploding-diaper stage and a few subsequent years (their little girl’s name is Rosie) but how long is that not-kissing-each-other thing gonna last?

Then there’s the other way it could go, where the test comes up negative and she and Cara move to L.A. and Natalie gets a gig as the assistant to Lucy (Nia Long), the head honcho at Tall Story, an animation studio that’s Not Pixar. There’s this co-worker of hers named Jake (David Corenswet) who’s charming and smart and sure would look great right next to her, wouldn’t he? That’s going well, but the career thing – well, it takes some work to get Lucy to stop asking Natalie to fetch coffee for long enough to look at her portfolio. She and Cara smoke joints on their patio and there’s a cutesy bit with some goats at the office and the casual mention of one of her favorite animated movies, which happens to also be streaming on Netflix!

The movie jumps back and forth between the parallel storylines, and we can tell them apart because Natalie has shorter hair in one. They’re frequently intermingled in montages that hold the movie together like the superglue you took to Grandma’s ashtray after you were roughhousing and knocked it off the davenport. Each universe is chock-full of mixed feelings and fleeting happiness and sadness. Are we profoundly moved yet?

What Movies Will It Remind You Of?: Look Both Ways is Sliding Doors but with an EPT test instead of a train.

Performance Worth Watching: You know, the entire cast is quite good, from Ramirez’s earnestness to Corenswet’s charm to Dee’s easygoing charisma. But Reinhart is the focus, and she makes a strong case for being snapped up by a superhero megafranchise so she can make bank.

Our Take: Awwww. AWWWWWWWW. Look Both Ways is cute. Aggressively nice. Adamantly fine. Its characters are all good, solid people. No heroes or villains here, just Real Life, Or a Hollywood Facsimile of Such, because everyone is so attractive, and always, always wearing a totes adorbs outfit. It’s full of good advice and truisms for its main character, such as, “You’re going to have to ask for what you want” and “You’re so lucky you have something to love.” Sometimes the conflicts Natalie faces carry all the dramatic weight of having poured a little too much cream in your coffee, a problem solved by simply adding a little more coffee to the cup. But the potholes in her road of life are at least universally relatable to many of us in a vague kind of way, you know, parenthood is hard, careers are hard, relationships and feelings are hard.

The movie layers in montages with the generosity one usually reserves for frosting a four-year-old’s birthday cake. Without the montages the movie would definitely be – well, a lot shorter, or laden with hacky dialogue signifying the passage of time, e.g., “It’s been years since” etc. etc., stuff like that, which the film throws in once in a while, because even more montages would’ve been a bridge or two too far. The intertwined plots feature twists and turns and tidy little ironies to illustrate how life is just life and happiness comes and goes no matter who or how or what you are or what you choose to do or be. You know, you come across two roads diverged in a wood, and all that, except neither looks particularly less traveled. I mean, it’s not like Natalie has a bunch of upsetting convictions or something, her fashion and style the object of a meticulousness not applied to her personality.

But we like her anyway, don’t we? This is a well-meaning and pretty greeting card of a movie, one of the sincere cards, not one that’s too flowery or religious, or one of the ones that are goofy and say the giver farted inside of it or something. I maybe sound facetious, but it’s difficult to dislike Look Both Ways, which is good-hearted and a touch corny, but made all the easier to watch by its amiable cast and gentle spirit.

Our Call: Look Both Ways is charming, diverting featherweight stuff made ever-so-slightly better by its talented star. STREAM IT.

John Serba is a freelance writer and film critic based in Grand Rapids, Michigan. Read more of his work at johnserbaatlarge.com.

Stream Look Both Ways on Netflix

Tejasswi Prakash, Karan Kundrra, Nakuul Mehta and others glam up the event