Sonam Kapoor and Anand Ahuja embraced parenthood last year as they welcomed their baby boy on August 20, 2022. A month later, they announced on social media that they have named him Vayu Kapoor Ahuja. Since then, Sonam and Anand have frequently been sharing the most adorable glimpses of their newborn son on Instagram. Sonam and Anand often share pictures with the little one, but keep his face hidden, or covered with an emoji. Nonetheless, fans get to see the precious moments that Sonam and Anand spend with their son Vayu. Now, in his latest post, Anand Ahuja has shared yet another unseen picture of Sonam with Vayu, and it’s just so adorable!

Anand Ahuja is missing his wife Sonam, and their son Vayu, and he shared a cute picture of them on Instagram. The picture shows Sonam Kapoor standing in her blue-and-white striped PJs, holding her son Vayu in her arms. The picture seems to have been clicked in the morning, as Sonam is seen in her pyjamas, with her hair tied back in a bun. Vayu is seen in a cute white outfit with animal print, and a pair of white socks. Sonam lovingly holds baby Vayu, and the candid picture is just too cute.

In his caption, Anand Ahuja shared a poem on children by Khalil Gibran. The poem offers advice on children and parenting, and Anand Ahuja further explained that he read the poem years ago, and always remembered it. He shared that he had saved the poem so that he could one day refer to it. “I read this years ago and have always remembered it. Saved it so I could always refer to it and now so grateful to put it into practice w @sonamkapoor … missing you both too much. #VayusParents #EverydayPhenomenal,” wrote Anand Ahuja. Check out the post below. 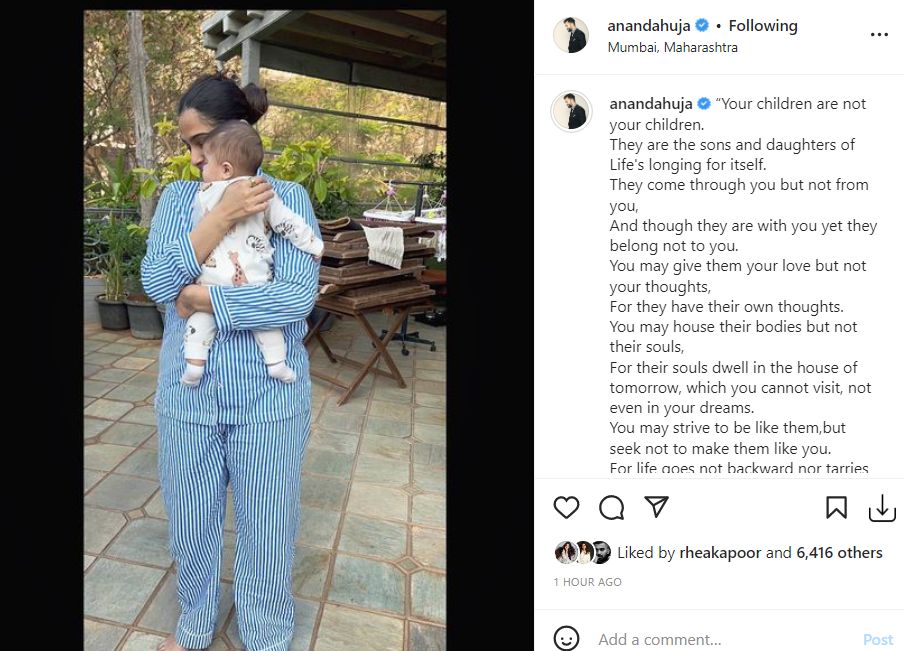 Sonam Kapoor reacted to Anand Ahuja’s post and wrote, “Love you so much #everydayphenomenal,” while Rhea Kapoor commented, “Happiest boy,” along with a heart emoji. Shanaya Kapoor dropped heart-eyed emojis under the post.  Meanwhile, fans couldn’t stop gushing over the cute picture. While one fan wrote, “He’s such a cutie !!! Baby Vayu,” another one commented, “cute pic mother son.”

On the work front, Sonam Kapoor will next be seen in  Shome Makhija’s Blind, co-starring Purab Kohli, Vinay Pathak, and Lillete Dubey.

ALSO READ: Sonam Kapoor sells BKC flat for Rs 32.5 crores; 5 other celebs who sold their apartments for a WHOPPING amount

Shah Rukh Khan opens up on AbRam’s reaction to Pathaan; Reveals why he didn’t give…

Shah Rukh Khan opens up on AbRam’s reaction to Pathaan;…