Rashmika Mandanna is one of the most gorgeous actresses who has gained immense popularity and has become a pan-India star with a fan following in the millions. Lovingly called the ‘National crush’ by fans, the actress is all set to make her mark in Bollywood with Goodbye opposite Amitabh Bachchan and Neena Gupta. Meanwhile, Rashmika on Friday jetted off to the national capital for Goodbye promotions and had a blast in the city as she tried several mouth-watering dishes. From dal makhani to makke di roti, she tried all the delicacies that are popular in the North.

The Pushpa actress gorged on lip-smacking dishes while she was in Delhi for her promotions. Taking to her Instagram stories, the actress shared a photo of herself, giving us a glimpse of the delicious Dilli food that she ordered. “When in Dilli..let’s hog on -dal makhani, butter chicken, paneer bhurji, seekh kabab, makai di rotti, dahi kabab…Okay I ordered a lot,” Rashmika wrote while sharing the photo on social media. Well, who would ever believe that the Geetha Govindam actress eats dal makhani, butter chicken and paneer burji considering her toned body?

Have a look at Rashmika’s pic: 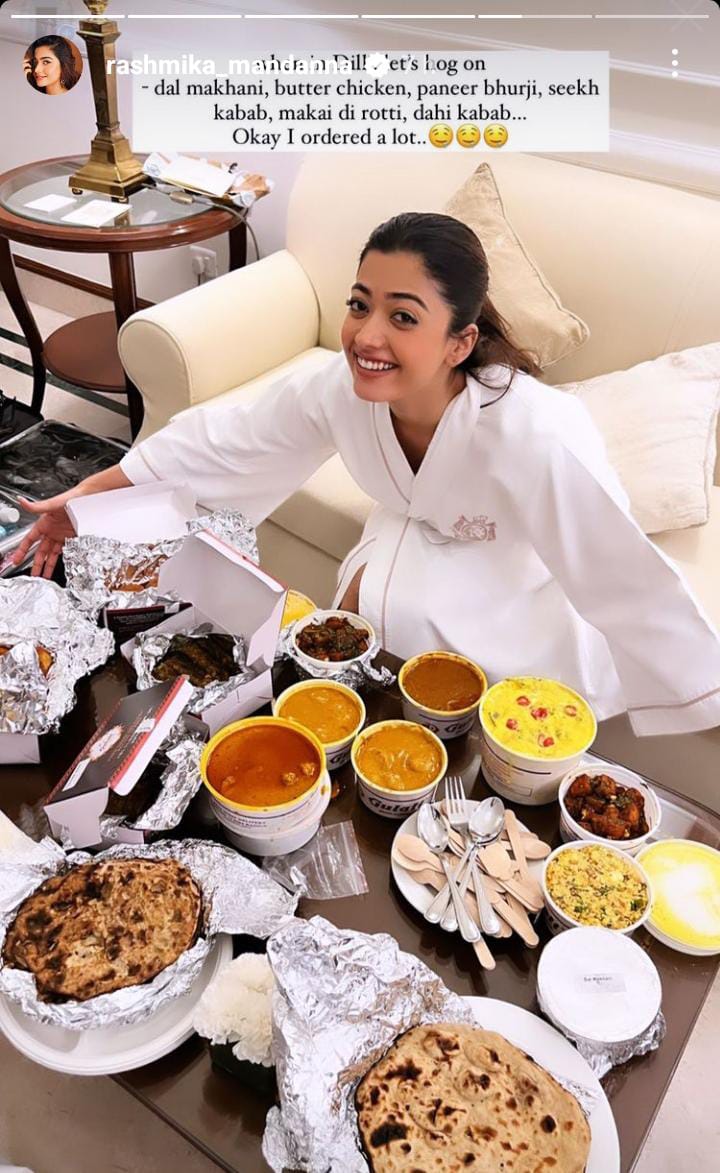 Talking about Goodbye, the trailer of the film was released a few days ago and it looks quite gripping. The family drama film has a heartwarming narrative and it showcases the ups and downs, chaos, drama, and love within every family. The film also stars Elli AvrRam, Sunil Grover, Sahil Mehta, and Abhishek Khan in pivotal roles. Produced by Ektaa R Kapoor’s Balaji Motion Pictures in association with Good Co. GoodBye is all set for worldwide release in cinemas on 7th October 2022.

Apart from this, the Dear Comrade star will feature next in Mission Majnu alongside Sidharth Malhotra in the lead which is directed by Shantanu Bagchi. The actress also has director Sandeep Reddy Vanga’s Animal opposite Ranbir Kapoor. It is slated to be released on August 11, 2023, and is produced by Bhushan Kumar & Krishan Kumar’s T-Series, Murad Khetani’s Cine1 Studios, and Pranay Reddy Vanga’s Bhadrakali Pictures. She will also be seen in the Tamil film, Varisu with Thalapathy Vijay, which is scheduled to be released in theatres in January 2023. She also has the sequel of ‘Pushpa’ in her kitty.

Anil Kapoor shares a stylish BTS pic as he wraps up The Night Manager remake; Karan…