Rhea Kapoor, who is holidaying in the Maldives with her husband Karan Boolani, has been sharing exotic pictures of their beach holiday on social media ever since. Speaking of which, Sonam Kapoor’s sister has yet again dropped new set of pictures and videos on her Instagram handle. In the images, Rhea can be seen having dinner with Karan and her friends including fashion designer Masaba Gupta and her rumoured boyfriend Satyadeep Misra. Sharing the post, Rhea wrote, “Dinner under the stars with the best dates in the world.”

Soon after she shared the post, Kareena Kapoor wrote, “Producer is going to give the artiste competition I feel on set …” Earlier today, Rhea also shared some breathtaking pictures of herself in which she is seen wearing a maroon swimwear paired with a shrug. She left her hair open and completed her look with black shades. Sharing the post, Rhea wrote, “Maldivian (chilli emoticon) Taken on the husband’s phone in a good light emergency.” Soon after she shared the post, her husband Karan wrote, “Lucky guy,” followed by a fire emoticon. Her brother-in-law and Sonam Kapoor’s husband, Anand Ahuja, commented, “Rhe (bee emoticon)> Queen (bee emoticon)”. 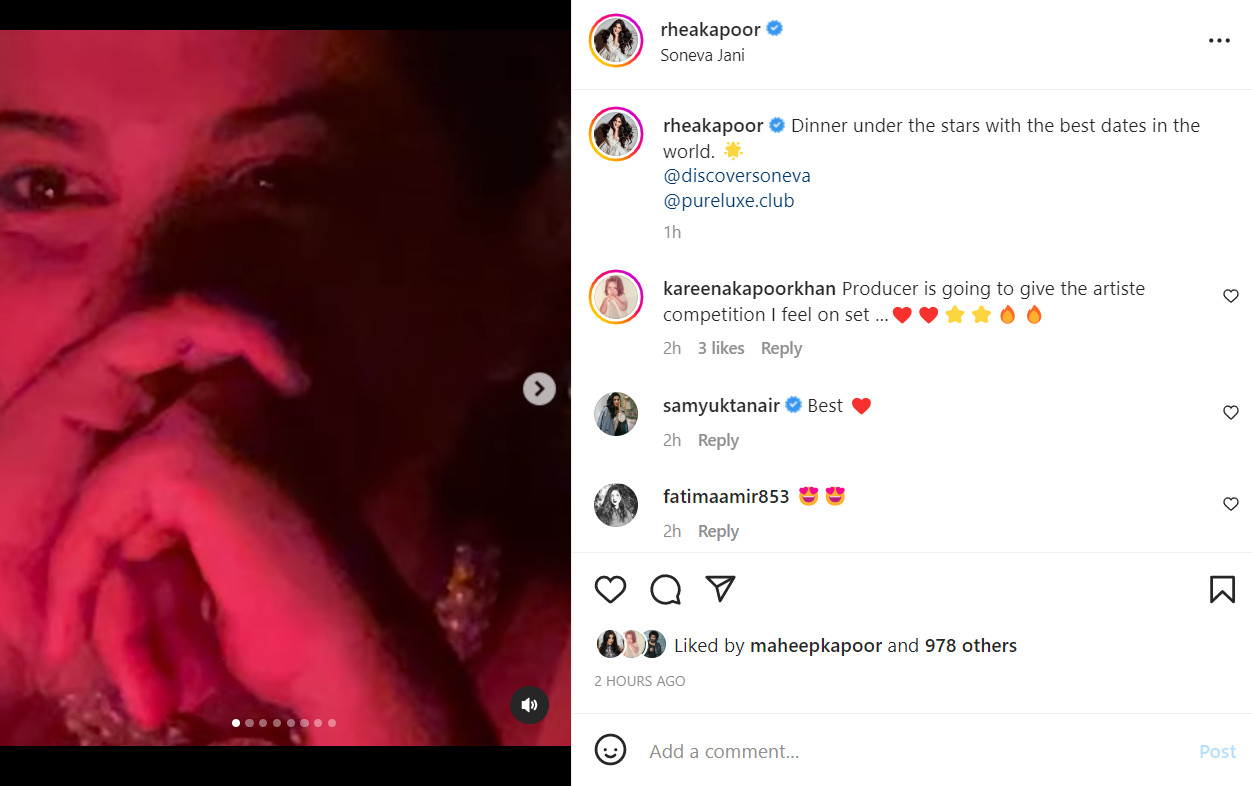 On Saturday, Rhea offered a glimpse of her “lazy lunch” in which she can be seen relishing crab shack. Also, she shared a gorgeous picture of herself relaxing in the pool. Sharing the post, she wrote, “Lazy Lunch. What’s a holiday without a crab shack? A Bad Beach. Ok, I won’t do that again.” Soon after she shared the post, her uncle Sanjay Kapoor wrote, “looks yummmmm,” followed by a love-struck emoticon.

Meanwhile, Pinkvilla exclusively reported that after the massive success of Veere Di Wedding, Rhea Kapoor and Ekta Kapoor will reunite to produce Kareena Kapoor Khan’s next. A source informed that the pre-production work on the film has already begun, and the process of finalizing the cast is currently on.