Kareena Kapoor Khan wishes her ‘most favourite’ Rima aunty on her birthday; Shares an adorable PIC

Kareena Kapoor Khan, the popular actress is known to be a family-oriented person. In many of her interviews, Kareena mentioned how hilarious Kapoor family get-togethers are, and credited her uncles and aunt Rima Jain for the same. In her Koffee With Karan episode with cousin Ranbir Kapoor, Kareena Kapoor Khan even mentioned that the Kapoors are like a ‘big Italian mafia family.’ Recently, the Laal Singh Chaddha actress wished her ‘most favourite’ Rima aunty on her birthday, with the sweetest post.

Kareena Kapoor Khan shared an adorable picture of Rima Jain with her son Taimur Ali Khan on her Instagram story and wrote: “Happy birthday to one of my most favourite people. My Rima aunty @rimosky.” In the picture, Taimur is seen having a fun time with his grand-aunt, who is seen touching his head with a playful expression. For the uninitiated, Rima Jain is the youngest daughter of the legendary actor Raj Kapoor and Krishna Kapoor. 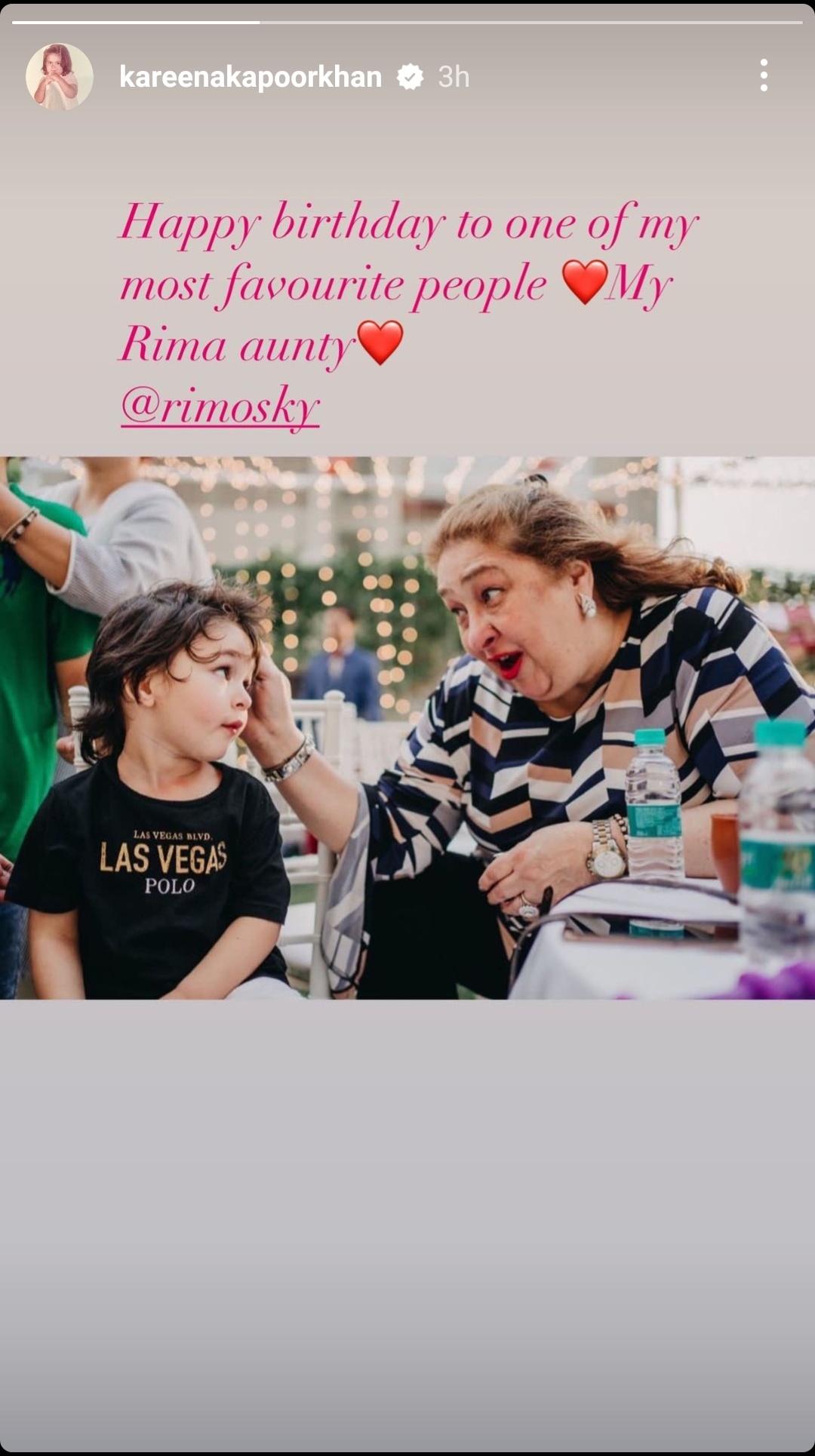 She is the sister of actors Randhir Kapoor, Rishi Kapoor, Rajeev Kapoor, and Ritu Nanda. Rima Jain is married to Manoj Jain and is the mother of actors Armaan Jain and Aadar Jain. Popular actresses Karisma Kapoor and Kareena Kapoor Khan, and jewellery designer Riddhima Kapoor Sahni are her nieces. Actor Ranbir Kapoor is her nephew, with whom she also shares her birthday.

Coming to Kareena Kapoor Khan’s personal life, she is happily married to actor Saif Ali Khan. The couple is blessed with two adorable sons, Taimur Ali Khan and Jeh Ali Khan. When it comes to the work front, Kareena is set to kickstart her next outing, which is directed by Hansal Mehta, in October. She is also making her debut as a producer with the film, which is touted to be a crime thriller that revolves around a murder mystery.

Jennifer Aniston turns on her ‘Christmas’ mood, shares PICS of her pups craving for…

Tabu gets emotional as she hugs Irrfan Khan’s son Babil Khan, fans say they have…

Gold Movie Review: Prithviraj, Nayanthara film is an original yet timid entry into…

Bride-to-be Hansika Motwani looks ethereal in a sharara at her Mehendi ceremony: See…

Tabu gets emotional as she hugs Irrfan Khan’s son Babil…