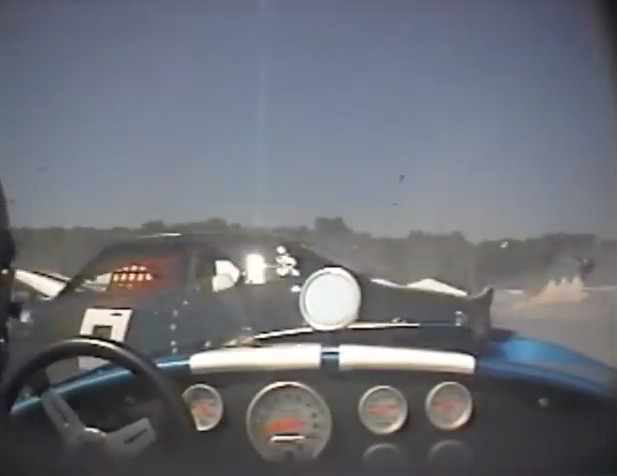 You have likely seen still photos of a massive wreck at a vintage road racing event and marveled at the destruction and sheer volume of the thing. Well, now you get to see video and not only video but an opening shot from the stands and then footage from everyone racing who had an in-car camera on for the event. This is a true disaster and it is pretty amazing that no one was killed. The initial pileup is one thing but the cars that drive into the pile at full speed are genuinely disturbing. Add into the fact that the stuff on the track ranged from real Shelby Cobras on down and you have a genuine reason to get weepy.

The race was the Brian Redman International Challenge and we’re not sure that we have seen another episode in the vintage racing realm that was worse than this one. Sure, calling it the worst wreck in vintage racing history sounds dramatic, but beat it and we’ll change our tune! The worst injury incurred during this series of crashes was a broken arm. That is kind of a miracle because you can see cars literally flying during parts of this and with the number of open cockpit machines competing, the potential for grieves injury is very high.

You may want to jump ahead a little after reveling in the scope of the situation with the grand stand view because there’s a bunch of stuff shot through the fence before the in-car videos start. The true magic of this video is the fact that you see the crash from so many angles and from so many cars.

Whoever made this did one hell of a job!

Watch This B-17 Skim The Surface Of The Earth Multiple Times – Decades Before CGI, This Is Flying Skill
Watch The Insane Norm Wilding Funny Car Crash From The 1995 NHRA Gatornationals

Neetu Kapoor on her bond with mother-in-law Krishna Raj Kapoor: I miss her more than Rishi Kapoor