BangShift.com Video From The 1972 NHRA SuperNationals Highlights The Sport’s First 5 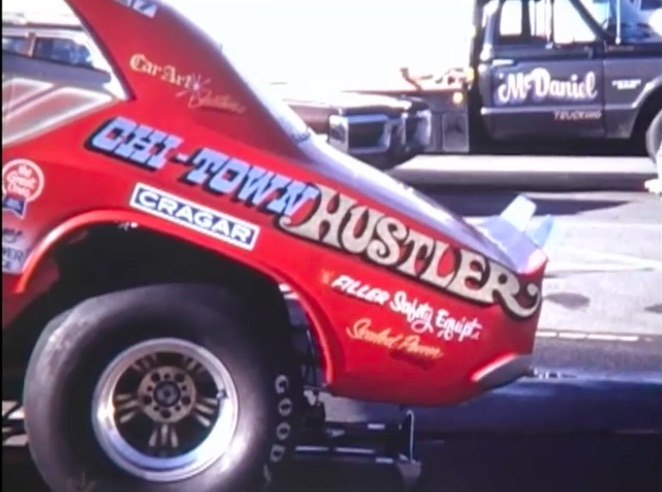 This is one of the neatest old drag racing films we have ever seen and it was shot by a fan on an 8mm video recorder at the 1972 NHRA SuperNationals which was an event that featured professional categories and ONLY professional categories of competition. This is the event where Mike Snively ran the first sanctioned 5-second pass in drag racing history with “Diamond Jim” Anin’s top fuel dragster and where Don Moody ultimately went 5.91. It is also the only national event in history won by a rear engine funny car and it was the machine of Jim Dunn.

The video was made and posted by a guy named Doug Gordon and he was pretty handy with the video camera back then because this is not some herky-jerky thing, it is a work of art with rich colors and while it lacks sound, the imagery is fascinating. From the scenes in the pits of engines being serviced, the long shot that hangs on what was then a new Donovan 417 engine, the burnouts, the cool drivers, and the big crowd that showed up at Ontario Motor Speedway, this film captures one of NHRA drag racing’s most historic weekend. Once the barrier fell, others jumped into the 5s to be in on the fun and we can only imagine the conversations that took place after Dunn won the race with a rear engine funny car. Were those going to be the next things that took over the sport? Hasn’t happened yet, that is for sure.

Lastly, the monstrous Ontario Motor Speedway must have been a sight to behold. Long gone now, it was one of the great super tracks of its era. The drag strip is insanely puny when put into perspective with the size of the place, right?

BangShift.com This Bad Ass Vega You Saw Built Here On BANGshift Can Be Yours!

BangShift.com Bigfoot and USA-1 Racing Down Lanes of Crushed Cars