BangShift.com Ride on This 1978 KZ1000 For A Top Speed Test Florida

Old School Hustle: Ride on This 1978 KZ1000 For A Top Speed Test On A Florida Runway 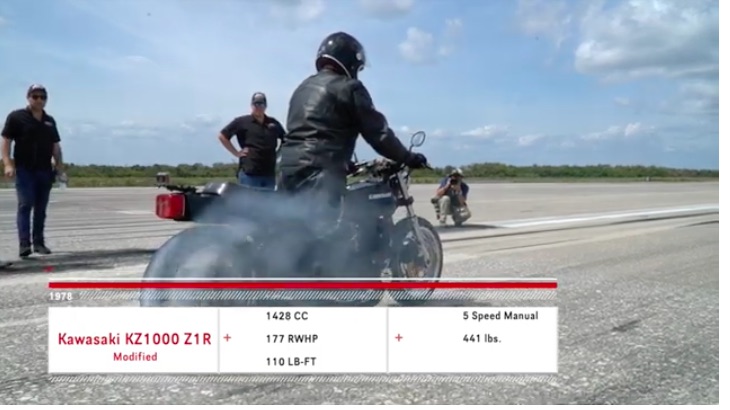 In the late 1970s, few bikes had the guts that the legendary Kawasaki KZ1000 did. The story continued into the 1980s of course, but the KZ1000, while s kind of slow seller at first, really caught its stride after the machine won awards like “Motorcycle of the Year” and a super bike championship.

This video shows a ’78 KZ1000 making a top speed charge down an airport runway known as the Johnny Bohmer Proving Grounds. This is a place where loads of top speed testing is done and they have a new channel showing loads of it. The reason we were interested in this video is because so many guy use the KZ platform for drag bikes still that we were wanting to see one topped out on a long course.

Now, we need to fess up on a couple of things here. Firstly is that the bike is no longer 1,000cc in displacement. It has been bored and stroked out to 1,428cc so it is definitely making more horsepower than a stocker would and that will translate to more speed.

The acceleration of the bike from zero to about 130mph is insane. This thing is bad ass fast and while we do not have a side by side comparison, we bet it could STILL hold its own with modern bikes, at least through the first several gears.

The last few numbers are a grind but this is a fun video to watch! Old school muscle bike action.

Cool Video: Formula 5000 Action From 1969 Featuring James Garner, Scooter Patrick, and Screaming V8s On The Road Course!
This Newsreel Footage From The First Indy 500 Shows How Much Of An Insane Calamity It Was

BangShift.com How To Sharpen Your Tungsten For Better TIG Welds: Tips, Tricks, And…