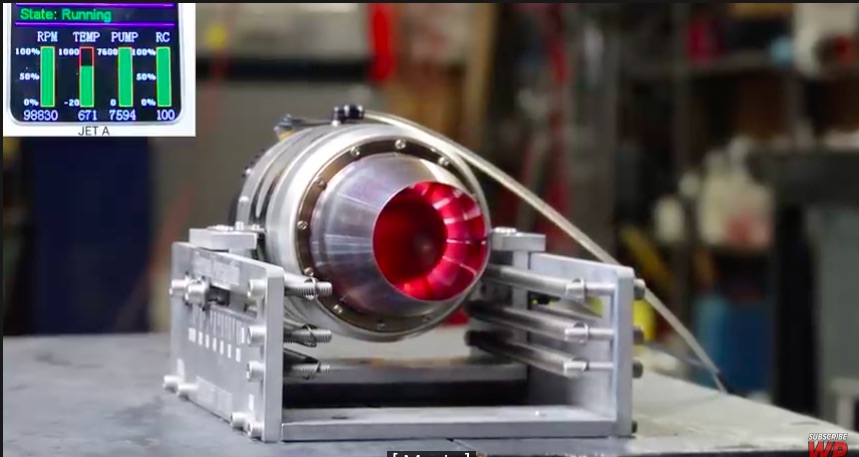 Now this is BangShifty as hell. You are going to watch an RC sized jet engine get dyno tested on four different fuels to see which one makes the most power. How do you dyno test a thrust engine? To be honest we had no idea either until we watched the video and saw the guy build the “dyno” rig. Effectively the engine is strapped to the test stand and as it comes up on thrust it works against springs, forcing itself forward. There’s some math involved and then you have a power rating, or at least a handy comparison chart.

Turbine engines will run on any combustable fuel. From tequila to kerosene they will make the whistling noises, shoot the fire, and take slow air in one and and shoot fast air out the other end. We were really surprised to see the different power produced between these four fuels. The fuels used here are Jet-A, diesel, bio-diesel, hydro-diesel. Believe it or not, there is a significant power difference between all four fuels.

This video is great and it’s great for the reason that we have never seen anything like it and we learned something. This is the same dude who has done some truly interesting things like running an engine with a wooden head, placing go pro cameras inside tires and intake manifolds, and generally being curiously awesome.

We really enjoyed every second of this.

You Ugly: This Video Looks At Seven Race Cars That Can Literally Never Win A Beauty Contest
This 1908 Film Shows How A 12-Inch BattleShip Gun Was Manufactured

RoboApe and Solana: The Best Cryptocurrencies for Supporting dApps

When Samantha called out misogynist trolls

BangShift.com PRI Show Photos: The 2022 Show Is Full Of Cars, Parts, Trucks, And…

BangShift.com The Pumpkin Run At Flemings Auto Parts: Our Last Gallery Of Show…