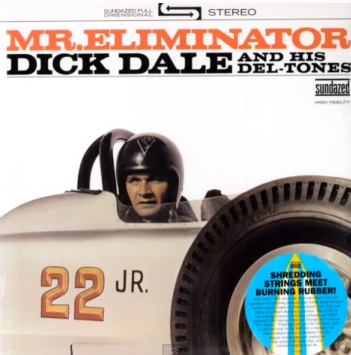 When it comes to the surf guitar, Dick Dale’s name is either at the top of damned close to it. The guy practically invented the genre and through the 1960s he cranked out many successful albums of surf guitar goodness. Dale went through a period in the earlier half of the 1960s where he released a couple of hot rod inspired albums, like 1964’s Mr Eliminator.

With cover art featuring a young Tony Nancy’s car with Dale in it and songs like Nitro Fuel, Girl in the 406, Hot Rod Alley, and this one Mr Eliminator it is car guy jams from wall to wall. The cover art, along with the photo of Nancy’s awesome 22 Jr. reads, “Shredding Strings Meet Burning Rubber” and that about sums it up. We don’t have to explain Dale’s iconic sound and style because we’re pretty sure you already know it. If you don’t, an education is just a click away!

Dale’s journey to California surf music icon was unlikely. He was born in southeastern Massachusetts and lived there into his teenage years. He was musically talented as a kid and played a couple of different instruments. What got the ball rolling on his California life? His dad. Dale’s father was a machinist and he scored a job working the then booming SoCal aerospace industry. The family loaded their car and drove across the country. He finished high school out there and the rest is history.

Mad Skills Yo: Watch This Excavator Operator Literally Plant His Stake With The Bucket
The Day The Bridge Fell Down: Amazing Footage From The Tacoma Narrows Bridge – An Engineering Failure For The Ages