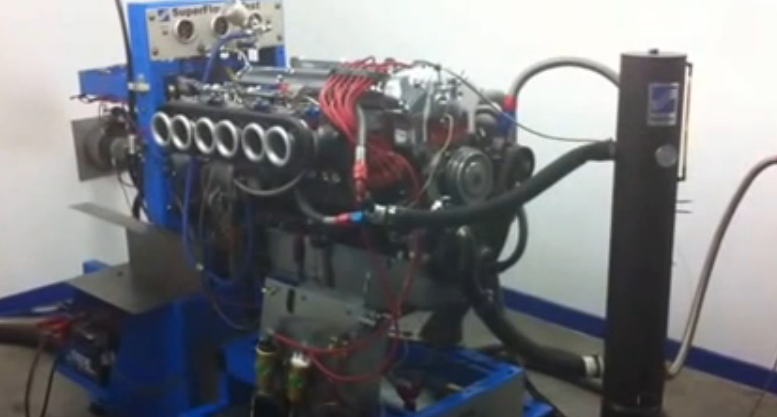 The 4.2L Jaguar DOHC six engine is one of those great mills that had a long life and still has legions of fans. The engine was in production from 1964-1992 a longevity that few automotive engines have ever experienced. The 4.2L engine is the “big block” of the Jag inline six family and it is a dedicated block. This engine is not based on a 3.8L block that has been bored. Instead a new block with siamesed bores and spread bore centers was used for added strength and durability. Interestingly, the factory used the same head from the 3.8L engine as well as the same cams despite the change in bore centers. Apparently, the difference was small enough that the more tightly spaced head did not have any issues. From the factory this was a 260-270hp engine. You are about to see one making 400hp.

How? We suspect that most of the standard issue hot rodding tricks are employed here along with some voodoo magic by the engine builders. This mill belongs to racer Don Norby, was built by Predator Performance, is being tested by R&R Motorsports, and was filmed by Bill Terry. That cast of thousands got to see and hear this baby up close. There are few finer noises in the motorsports world than an inline six engine with an attitude and this one has it in spades. We don’t know what the compression is, what the cam specs are, and what the head is but when an engine is making 400hp naturally aspirated out of 252di without a power adder, we are interested in watching it work!

Here Comes The Boost: Here’s A Review Of The (Then) Newly Turbocharged 1992 K2500 Diesel