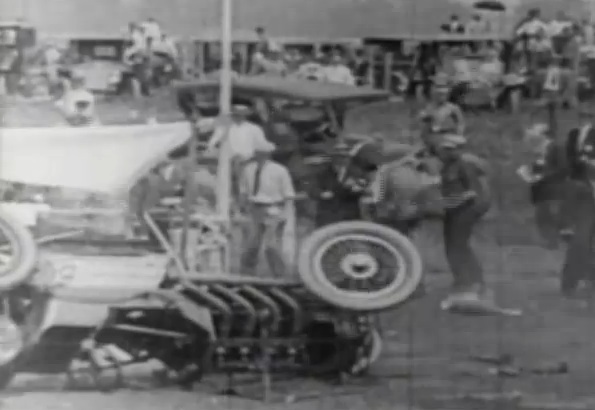 There are times that I think living in the early 1900s would have been pretty incredible. From a mechanical standpoint you had the birth of the auto industry, the birth of powered aviation, the start of racing, the invention of stuff like steam shovels, tractors, and other very handy devices that were happening on a frequency that is truly mind blowing. When you take those accomplishments out of a vacuum and set them against the way life actually was at the time, things change drastically. The world around you was a dangerous place and people’s attitude’s toward life and death certainly were not what they are today. People died racing cars at an incredible rate. Spectators died at races regularly and it was kind of an accepted hazard. Having said that, you’ll now understand what you are going to see below a little better. This is an actual newsreel made at the 1911 Indy 500, the first such race ever held and it shows just how insane the whole affair was.

From the choking smoke to the dearth of any sort of safety protection for the driver or his riding mechanic, let alone anyone else there was real bravery involved in this stuff. You’ll see awesome stuff like a pit stop where a crewman kicks a tire onto a very thin wheel, you’ll see guys passing and zipping along the straight, and you’ll see some fun pre-race scenes. The scary stuff involved things like a riding mechanic falling out of the car he was in…on the front straight, a huge crash after that that shows wrecks strewn everywhere, and a complete lack of crowd control, allowing fans to the scenes of these crashes. The whole thing seems to be on the edge of coming to pieces but it didn’t.

I have been on a reading kick lately about the early 1900s because I find the whole time period absolutely fascinating. Many legends were launched from this first Indy 500 and Ray Harroun’s Marmon Wasp is still around in all of its massive glory. Perhaps beyond all odds, Harround lived until 1968 when a significant percentage of his contemporaries never escaped the ‘teens. After watching this film, you’ll understand why.

Old School Hustle: Ride on This 1978 KZ1000 For A Top Speed Test On A Florida Runway
Momo Steering Wheel Saved From The Crusher – Is Restoration Possible?

BangShift.com How To Sharpen Your Tungsten For Better TIG Welds: Tips, Tricks, And…