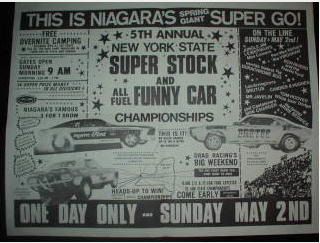 From the early 1960s right into the middle 1970s Niagra Drag Strip was there to serve the needs of drag fans in the Toronto, Canada and Buffalo, New York areas of the world. The place brought all the big names one would expect to hear and had their own premier events like the Gold Cup, a mid-summer classic that brought in the money, the stars, and the people from all over. This ad is for that race and while we’re not sure of the year we’re going to place it somewhere around 1968.

It is not a totally obnoxious screamer but rather a fast paced and perfectly dictated lineup of sweetness that ranges from Prudhomme and McEwen to Mr. Norm, Jack Chrisman and even Jon Lundberg gets plugged in this one. Of course that made us smile because when you were as big a deal as Jon was in this era, of course the announcer would get brought up on the radio ad. That’s pretty freaking awesome if you ask us.

The event would also feature sportsman racing in various classes and the zaniest part? This was a one day show! The guy in the ad is going about 300mph and then he drops the one day bomb and we want to get in the hot tub time machine to see this event in person. We bet it was awesome.

Maybe it is just us but we could listen to ads like these all day long. There’s something about the guy’s voice, his excitement and the outlandish nature of the whole deal that we’re loving. Press play below and you’ll love it too.

History Has Been Kind: This Review Of The 1988 Chevrolet Corvette Is A Good Reminder Of This Platform In Its Prime
A New Collection Of Vintage Ads From Drag Mags Of The Late 1960s/Early 1970s

5 pics of TV actresses that prove they swear by yoga