BangShift.com Cement Mixer Hook Up To The Pulling Sled 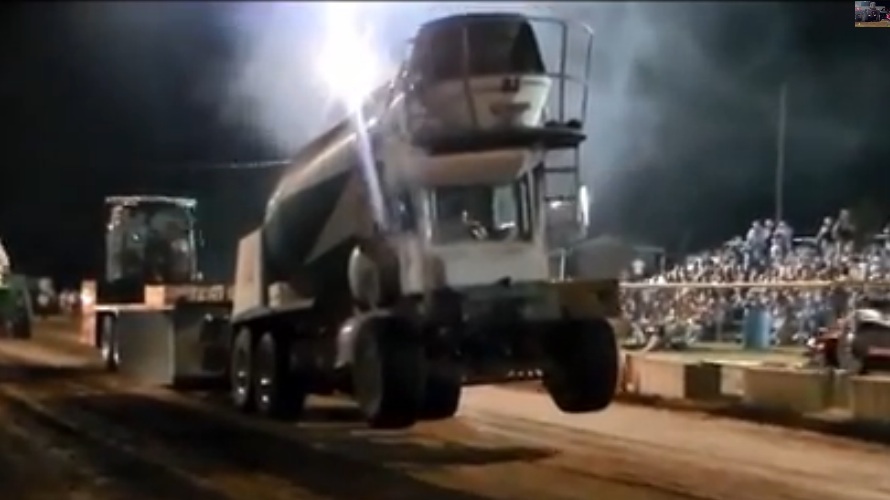 Just when you thought it was safe to go outside….BAM….cement mixer with the wheels up, hooked to the pulling sled. Who hasn’t thought about the grunt force trauma a rig like this could apply to the ground? While it sucks to get caught behind one of these lumbering giants in traffic because they are slightly slower than a steamroller, they aren’t built for speed. They are built to haul around a big load of concrete and keep that slurry mixed up and happy on the way to a job site.

I am reasonably sure that this is an Oshkosh truck. A Detroit Diesel could be powering the thing and the trans is likely an Allison automatic. Blind speculation though.  Obviously there is a big diesel engine in the back making the power and there are some axles that are virtually bomb-proof under it, but after that we’re counting on you to fill us in and we know there’s someone out there in readerville who has driven, wrenched on, or pulled one of these trucks apart. We once talked to a monster truck guy who said that he used cement mixer axles under his truck. That was kind of neat and certainly speaks to the strength that they possess.

They may be slow and the bane of people trying to get somewhere, but as you will see in this video, the suckers are built for brute strength and not much else. The bonus is that it is center steer like a funny car!

PRESS PLAY BELOW TO SEE A CEMENT MIXER DO SOMETHING WE GUARANTEE YOU HAVE NEVER SEEN IT DO BEFORE….FULL PULL OR NOT?