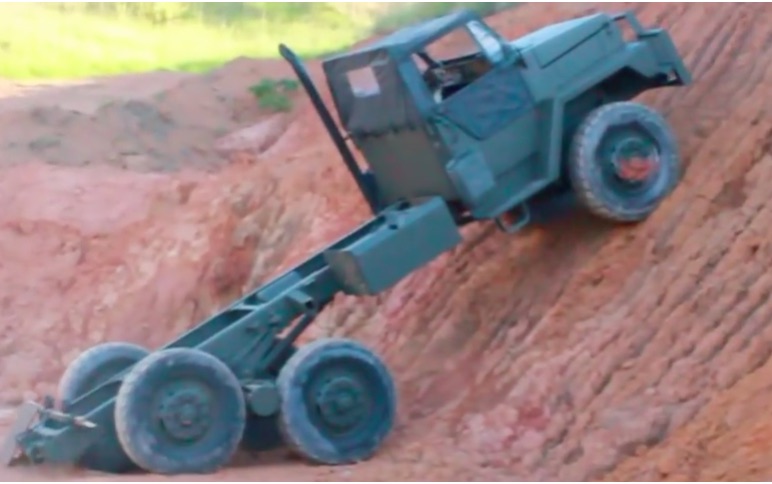 Army trucks, we love them. Why? Well for the same reason we love functional hot rods that are lacking in amenities but are heavy in ass kicking ability. No matter the country of origin you are typically not going to find a lot of cushy stuff in an army truck, especially a large one. They are loaded full of ability, though and that’s exactly what caught our eye when it comes to this Brazilian 6×6 Engesa EE-25 and its awesome Boomerang rear axle. The truck uses a walking beam style layout but it can articulate in some incredible ways to keep the rears planted while the rest of the chassis rises to some pretty steel angles.

Quoting a story on the rear suspension:

The suspension of the EE-25 utilizes live axles and leaf springs, the rear suspension having a conspicuous “Engasa Boomerang” walking beam, a feature seen on several other Engesa 6-wheeled military vehicles. This suspension articulates, allowing the EE-25 to traverse large undulations with greatly increased traction, handling, and weight distribution compared to non-articulating vehicles.”

It is tough to accurately use words to describe how this is working and not pulling the driveshaft out of the transfer case but the basic gist is that the center section of the axles are maintaining their position but there are “legs” that extend where the wheels are bolted. Those legs are what are really doing the articulating. From our understanding there is one center section and both sets of tires are working off of this. The trucks are “twin screw” in the sense that all the rear wheels are driven but there is only one actual axle back there.

Hey, it may be weird but it works. This truck has a Merecdes diesel engine making the power and it sounds pretty damn sweet with the open exhaust stack behind the half cab. The truck seems to scoot pretty well during the video but that makes sense with nothing but a cab and a frame to lug around, right?

So here you go, one of the more interesting things you’ll see today. The Boomerang at work!

Watch This Scale Porsche Flat Six Fire Up And Make Really Wild Noises!
This 1968 Ford Truck Commercial Is Crazy And Had To Have Been Fun To Make! Full On Beat-Downs!