BangShift.com Battle Of The Monster Trucks

Video: Watch 1985’s Battle Of The Monster Trucks In Its Entirety! One Of The Best 80’s Monster Truck Videos Ever 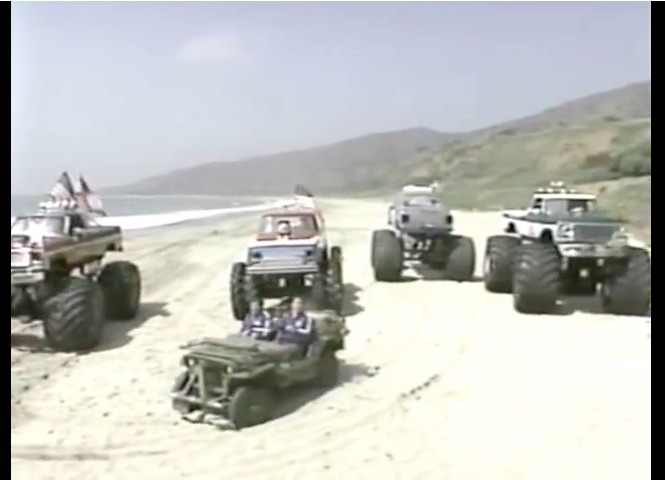 I’m going to come right out and admit to still owning and occasionally popping the VHS copy of this video into our now decrepit VCR here at home. It is one of the coolest looks back a the earlier end of the monster truck craze and there’s lots of laughs to be had when you look at what guys were doing 30 years ago versus what monster trucks are now. There is no way that people could have predicted the evolution of the sport as it has happened but back in the middle 1980s there were millions of kids at home like me just obsessed with these flipping things. Leaf spring packs that could support bridges, suspension travel that did no exist, and car crushing at a walking pace, these trucks were oversized dreams in steel that I could not get enough of.

This video (and the YouTube version linked below) is cool because it is an overall look at the monster truck universe. There are multiple events highlighted here, lots of different trucks shown, and according to the film, the first ever side by side racing for these behemoths ever caught on tape as well. If you have never seen it, lock your office door, take a long lunch, and press play for 46 minutes of mechanical goodness.

One of the funniest things about the tape that I never picked up on as a kid but certainly realize now as an adult is the bizarre casting of Claude Aikens who was a pretty serious actor that had a long career on stage and screen in any number of capacities. He passed from cancer in 1994 but as you can tell, he didn’t know which end of a monster truck the engine went int, let alone actually care about them. Some of the voice over stuff that is on the video seems as though he gave it a whirl after a couple of vodka-tonic drinks to take the edge off. The best part? He was right there next to Jan Gabriel when the next video “War of the Monster Trucks” came out. Hey, if it worked once….

This is fun stuff. Turn the clocks back 30+ years and watch some monster truck goodness.

Press play below to see a video that I still have the VHS copy of!