There Once Were Giants: This 1950s Video Showing Off The New Caterpillar D9 Shows The Beginning Of Massive Earthmovers 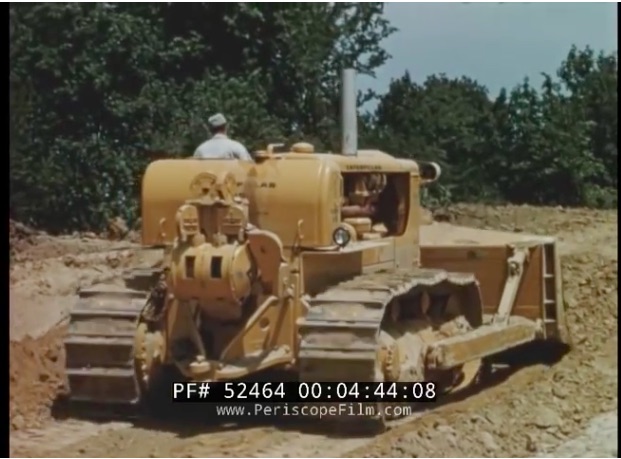 People who like big equipment know that the Caterpillar D9 tractor is one of the most well known, well developed, and widely used machines around the world. In this day and age of mega-giant earthmoving machines, it is not the biggest, but it is still a massive beast that works on jobs that range from mining to highway building. Like any hulk out there, the D9 had to have come from somewhere, right? It did. It came from the 1950s and it came from a battle of increasing size and capability between companies like Caterpillar and Euclid.

Back when the Caterpillar D9 was introduced it was created to battle what was then the biggest bulldozer in the world, the Euclid TC-12. Euclid had changed the game by effectively mounting two of their dozers side by side in the same chassis and with two engines, creating something more huge and powerful than the world had ever seen before. The downside was that the thing was ungainly and it sucked down fuel with two Detroit Diesel engines running at once. The D9 was a response to this machine and it was better in every respect. A single turbocharged diesel engine that made around 300hp when introduced and well over 300hp over time was hooked to a torque converter drive transmission, and innovative developments in the track drive system to make it easier and more efficient to use than anything else on the market.

When we look at the 108,000lb version of the Caterpillar D9 today as compared to this open cab, comparatively small machine, the old one almost seems quaint. Much as an old car can seem quaint as compared to modern one, the old D9 set the stage for the crawler tractors and bulldozers that we have today. If you like old equipment, this video is tops!

Great Video: The Story Of The 1970s Superbikes – See Them Sitting and Ridden!