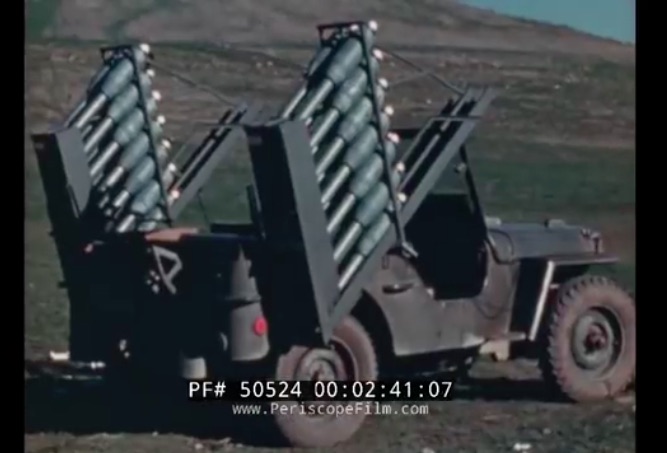 Now THIS is a mighty mite! As we all know, there was constant innovation and invention during WWII. After all, nothing spurs the human mind on like figuring out ways to knock out the bad guys. For better or worse, war causes people to go into mental hyperdrive and the ideas just flow like a river. As fighting was progressing in 1944 and the war was definitely working in the favor of the Allies, more and more offensive weapons were being developed to help break the ranks and the will of the enemy. With the Jeep being a smashing success in basically every job it had ever been assigned to work, it made sense to convert the tough little bastards into weapons systems as well.

Jeeps had been developed with tank killing recoilless rifles and these were effective because the little Jeeps were so mobile, they could shuck and jive while trying to take out the bad guys. In this case though, it was assault rockets that were being developed. The Russians had a truck mounted system that was a little more robust than this Jeep model because of the size of the vehicle but it operated in much the same way. The short range rockets were fired in a fusillade at whatever short range target our guys were trying to destroy.

There are two models being tested here. One that has the rockets mounted horizontally across the back of the Jeep and the other with a pair of vertical magazines that were mounted to its haunches. We do not think that these were ever deployed but man, they sure look cool, especially in action.

OK WWII buffs, did these rocket launching Jeeps ever see a war theater? Talk about neat!

A Trip Back In Time: This Incredible Drag Racing Film Shows Guys Like Connie Kalitta, EJ Potter, The Arfons Boys and Others As Kids!
Watch This Scale Porsche Flat Six Fire Up And Make Really Wild Noises!

‘My Life As A Rolling Stone’ Episode 4 Recap: Charlie Watts