Arjun Kapoor travels ‘the road less travelled’ with THIS actress, and it’s not Malaika Arora

Bollywood’s most adorable couple Arjun Kapoor and Malaika Arora take the internet by storm every time they get snapped together in the public sphere. They both have been dating each other for quite some time now and leave no moment unturned to exude couple goals. However, this time, to much surprise, the Gunday actor has said he has travelled on the road less travelled with not Malaika, but—Bhumi Pednekar.

Notably, Actors Arjun Kapoor and Bhumi Pednekar have recently wrapped shooting for a thriller titled, ‘The Ladykiller’. However, one cannot miss the fun banter between these two actors. In one such incident on Thursday evening, Arjun Kapoor posted a photo of Bhumi at an undisclosed location and captioned it, “The road less travelled @bhumipednekar”.

Minutes after this post, Bhumi responded to Arjun with a bunch of white hearts and said, “But been travelling too many with you now. From Manali to Glasgow. @arjunkapoor” 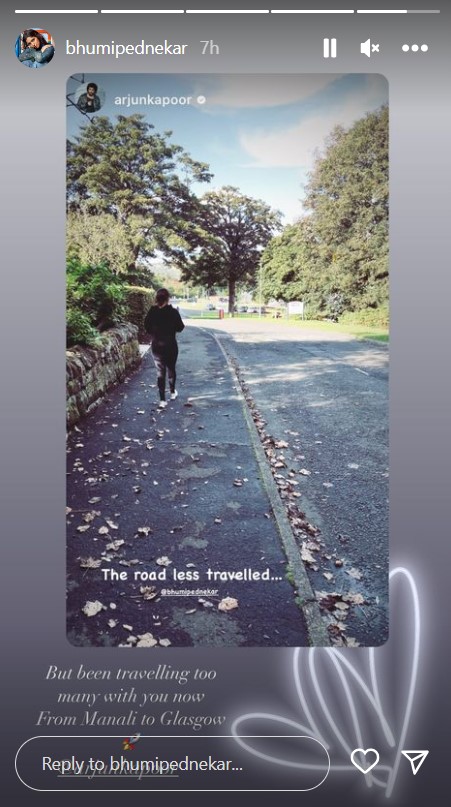 Recently, news agency IANS reported that Arjun Kapoor and Bhumi Pednekar, who finished shooting for film ‘The Ladykiller’, have signed another film that pairs them together.

IANS, in its report, wrote, “The actors have left for London to begin work on this new film. The untitled romantic comedy features both in supremely fun and entertaining roles.”

According to the news agency’s sources, this project starring Arjun Kapoor and Bhumi Pednekar is set to be directed by Mudassar Aziz.

Meanwhile, on the work front, Arjun Kapoor has a couple of projects lined up —be it for film shooting or film promotions. Kapoor will feature in films namely Kuttey, The Ladykiller, and Meri Patni Ka Remake.

Migrants claiming they ‘just want to get to NY’ broke into elderly Texas farmer’s house: grandson