Alia Bhatt wishes her ‘pops’ Mahesh Bhatt on his birthday: May your days be full of aloo fry

One of Bollywood’s most critically-acclaimed as well as popularly-accepted directors, Mahesh Bhatt is celebrating his birthday today (September 20). He is recognised in the film industry as an outstanding director, producer and screenwriter. Apart from directing and producing movies, Bhatt is known for mentoring actors. Bhatt made his debut as a director with the film, Manzilain Aur Bhi Hai, in 1974. He was 26 then. He turned into a producer in 1987 with the film Kabzaa under the banner, Vishesh Films, which he co-owns with his brother Mukesh Bhatt.

Meanwhile, actor Alia Bhatt took to her Instagram stories and penned a sweetest wish for her dad. Sharing Bhatt’s picture posing with an aloo fry, Alia wrote, “Happy Birthday pops, may your days be full of aloo fry.”

Have a look at Alia’s birthday wish for her dad: 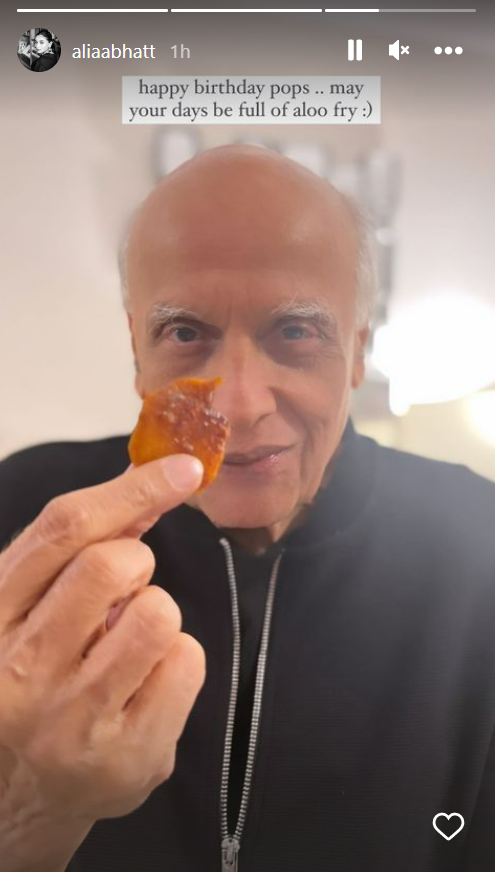 Earlier, speaking specifically about her relationship with Bhatt, Alia had revealed on Komal Nahta’s celebrity chat show, Starry Nights 2. that her father’s absence had impacted their relationship. Alia was born to Mahesh and his wife, Soni Razdan in 1993 when the filmmaker was at the peak of his career. At that time, Mahesh was also directing two to three films simultaneously and was working on a pretty tight schedule. Though Alia now shares a warm camaraderie with her dad, it was not the case until her debut in Bollywood. That was when she had understood how demanding and consuming the job in this industry is.

On the work front, Alia is currently basking in the success of her recently released film, Brahmastra Part One- Shiva, which marks their first on-screen collaboration with husband Ranbir Kapoor. It also starred Amitabh Bachchan, Mouni Roy, and Nagarjuna Akkineni. It was on the sets of Ayan Mukerji’s directorial that they first began dating and are currently expecting their first child together.

Apart from this, Alia has many interesting movies in their pipeline. The actress will star in her Hollywood debut film, Heart Of Stone with Gal Gadot and Jamie Dornan in the lead. She will also be seen in Farhan Akhtar’s Jee Le Zaraa with Priyanka Chopra and Katrina Kaif and Karan Johar’s Rocky Aur Rani Ki Prem Kahani with Ranveer Singh.